I still smile when I think about Valentine’s Day last year.  Can’t wait to put the menu together for this year! 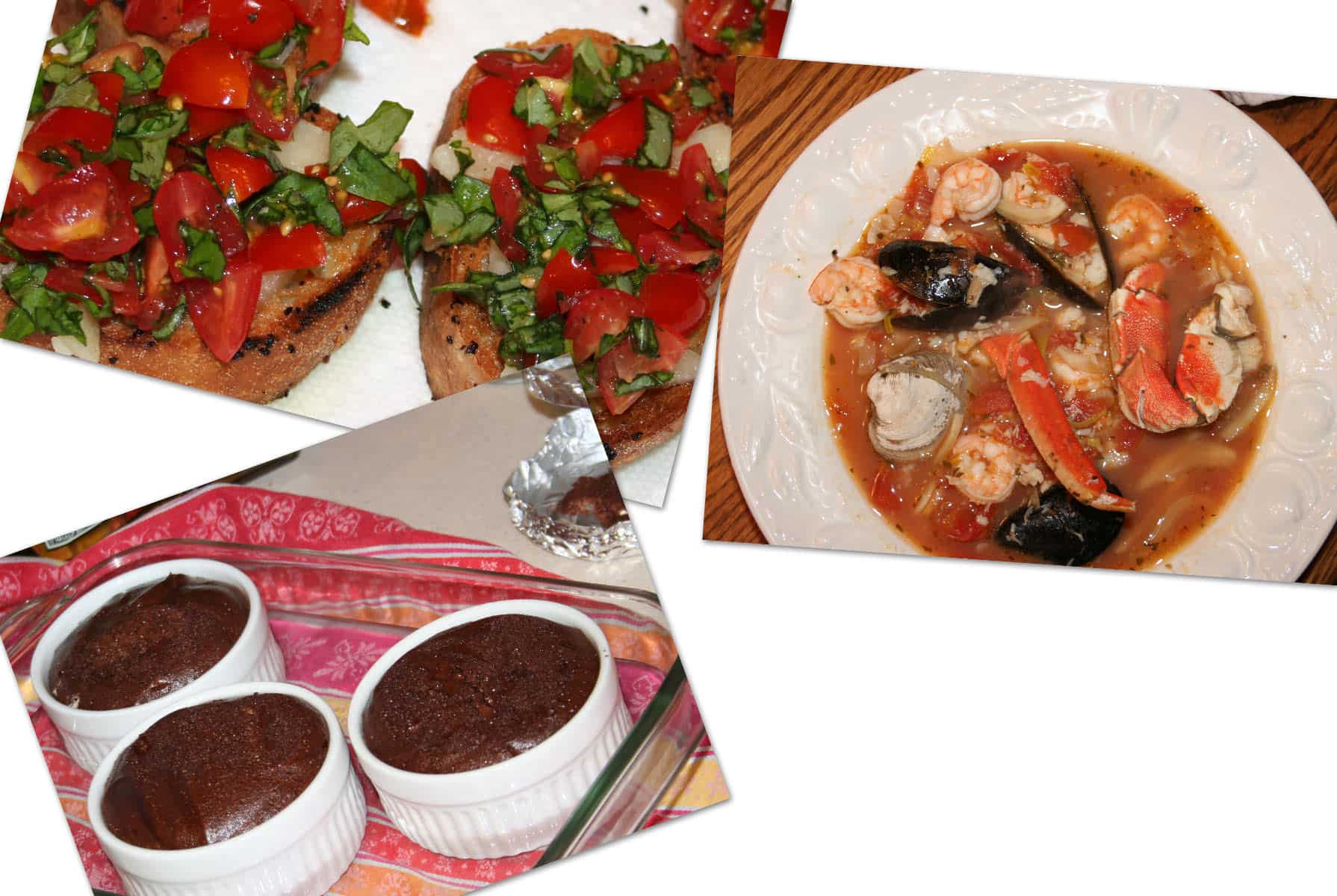 Matt and I began celebrating Valentine’s Day in advance by selecting a few recipes for the sweetheart dinner we planned together (including youngest daughter, Kristen). Various options were considered—Spanish Tapas, Scallops in Garlic Butter, Bruschetta (Julie & Julia style), Seafood Paella, and Bouillabaisse—wanting to prepare something we’d never tried before, adding a little risk to our adventure.

Since chocolate is the standard-bearer for dessert at our house there was no quibbling over our final course, so it was decided on first. I had prepared Chocolate Mink from Gourmet Magazine a few years back and it just seemed right to have at least one recipe on our carte du jour that was familiar, though it didn’t really fit our virginal, international fare. However, lo and behold, there it was on gourmet.com, a new version of our old favorite fitting into place with its south of the border twist—Mexican Turtle Chocolate Mink.

Even though scallops cradled in a host of garlic and butter seemed like a worthy appetizer for this occasion, I could still picture the scene from the movie Julie & Julia in my head when Julie’s husband bites into the bruschetta … the fried French bread, fresh tomatoes, and basil were just too much to resist. Unintentionally, the final menu took on a movie theme as Matt’s fondness for Bouillabaisse influenced his main course vote, remembering a cool scene from a spy movie, In Like Flint. I agreed and V-day was launched.

Recipes and shopping list in hand, we entered Whole Foods with enthusiasm picking over fresh ingredients and choice seafood as though we did that sort of thing all the time. It was sheer bliss for me, browsing bright, beautiful vegetables with the promise of creating and sharing a feast with the man I love. Fennel, check; leeks, check; red pepper, check; and so on.

Before long we moved on to the fish counter to peruse the fresh catch as well as a variety of crustaceans—lobster, mussels, crab legs, littleneck clams, and shrimp—each one playing a key role in our main course. An important aspect of Bouillabaisse is the stock, which forms the base of this renowned fisherman’s stew, thus landing fish bones a spot on the list. The fishmonger did not have any bones, but instead could offer us a salmon head.

Now, aspiring to be a great cook, I figure you have to overcome the squeamish, sickly feeling one gets when pondering things like octopus, whole fish, or for some, the mixing of meatloaf with your bare hands. For me, fish heads are right up there in the squeamish category, just short of creepy, the way their eyes follow you around a room like an old portrait in a museum. There I was, standing beside my amiable husband with a line forming behind me, facing a moment of truth—do I really have what it takes to be a great cook? Wanting to appear nonchalant about fish heads, as any great cook would, I confidently accepted their offer and placed it in our cart. Meandering through the rest of the store, occasionally checking our list and sampling cheese, we settled on some crusty French bread for our Tomato and Basil Bruschetta.

Once we were home and relaxed a bit, our attention turned to the kitchen and the mission of the day—to enjoy one another while preparing and experiencing new recipes. We reviewed the instructions to establish the flow of activity and jumped right in. Apron secured, I could not keep my eyes from darting over to the salmon head, determined to muster the courage to face my fate of cooking something that was watching me cook it. (C’mon, it’s hard not to look at someone staring at you!) I remembered being in New Orleans when I was 20, eating barbecued shrimp for the first time, having no idea it would come to the table with the heads and antennae intact. It was delicious, and I did manage to cover their beady little eyes with my napkin so I could finish the meal, but it was the last time I had anything to do with a staring contest while eating.

At this point, I remembered how Julia Child was described as fearless during her days at Le Cordon Bleu as she split lobster or boned a duck. Thankfully, I did not face the scrutiny of a French cooking class. My adoring husband, busy slicing fennel, did offer to contend with the salmon for me (chivalry is not dead), but the stock was my appointed task. So with ingredients assembled and clear resolve, it was time for “everybody in the pool” (a funny phrase from my friend Donna when trying to get food to cooperate) and our fisherman’s stew was underway.

About this time, not realizing I let out a noise resembling a motion-sick cat as I stirred the stockpot, Matt said, “did the fish head just move?”
“No.” I said unflinchingly, resisting his attempt to get me to admit I was way outside my comfort zone. Instead of queasiness, laughter bubbled up and I knew the worst was behind me (except when the fish head fell apart in the stock and the eyes just floated by themselves—which oddly makes me laugh now!).

Matt prepared the rouille for the soup while I finished the appetizer (we’d been cooking for over 2 hours, surely it was time to eat something). The bruschetta was heavenly with its delicately crunchy garlic crust and generous topping of sweet, juicy grape tomatoes and basil.

Matt had chosen the perfect wine to accompany our meal, which also refreshed us during our brief appetizing respite. Kristen was lured into the kitchen by the aromatic invitation of the Bouillabaisse and the anticipation of mussels, crab, along with shrimp in her bowl. We were all anxious to taste and savor.

The flavors melded into a rich seafood stew that was as pleasing to the eye as it was to our palate. The white fish blended subtly into the background while the shellfish took center stage with its coral colors, shells, and textures. The garlic bread was great for dipping, soaking up the broth to deliver that crispy, soup-soaked bite we all love. Of course, we analyzed the qualities we liked and the minor things we would change, but far beyond the fare that rested in front of us, we had the joy of discovering something new together.

Dessert was last, but certainly not least. The Mexican Turtle Chocolate Mink (involving neither turtles nor minks) greeted our taste buds with velvety, chocolate delight. The hint of cinnamon that lingered behind the intense chocolate encounter was reminiscent of Mexico, the toasted pecans and caramel sauce was the perfect accent. Six simple ingredients delivered a most rewarding finish to the day.

Up to this point, Matt had been supporting cast in the kitchen offering an extra pair of hands to help whenever needed. However, this occasion brought a focus on relationship over expediency or efficiency, a genuine collaboration from choosing the menu to setting the table. As we chopped, laughed, measured, kissed, poured, sang, discussed, stirred, and danced our way through the late afternoon, it had become the most delightful Valentine’s Day we have ever shared.

The food was delicious and the companionship, sublime. I was reminded once again that good food is more about the people we share it with, than the fuss over all the fine ingredients. Though I am no longer intimidated by the seemingly creepier parts of a fish, or under the auspices that one can only be a great cook by engaging such things, I am quite content to leave that to others.

If you avoid processed foods and love serving your family nourishing meals, we are passionate about the same things. END_OF_DOCUMENT_TOKEN_TO_BE_REPLACED